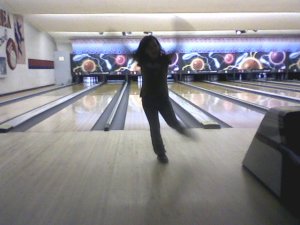 Kamehameha Schools, along with Big Brothers Big Sisters co-sponsor a mentoring program for orphaned students in grades 4-6. We took them on a weekend outing to ‘Aiea Bowl. We had a blast, as well as surprisingly good pizza. My “poki’i” is a 5th grader named Joseph. He’s a left-handed pitcher for his baseball team and spends most of his time playing video games. Unfortunately, he did not attend today’s outing. I think he lost his permission form (for the 3rd time) and was too embarrassed to show up….