Got a call from a buddy at 5:30 A.M. and got the “heads up.” We’re under a tsunami warning. People living in inundation zones are being asked to evacuate to higher ground. There were reports of long lines at stores and gas stations. Sirens blared at 6 A.M. It felt kinda eerie….

Wait a minute. I live in a high rise. Should I stay or should I go? Since I was planning on attending the Kamehameha Schools Ho’olaule’a anyway, I decided to go to campus early. Our campus is up on a hill, and is probably the safest place to be. We have security, water, power generators, etc. I even have a computer and an ample supply of Starbucks instant coffee in my office.

As I watched the news streamed live on my computer, I learned that (literally) every single event on the island got canceled. I expected to hear that our Ho’olaule’a would be canceled as well. Report after report, it was mentioned that our Ho’olaule’a was still on. Gee, we’re getting a lot of free state-wide publicity on every media outlet, I thought to myself. Still, I was sure that no one would turn out for this. I decided to catch the shuttle to upper campus to check it out…. 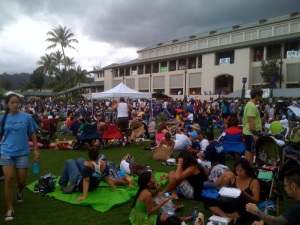 I was shocked to say the least! The place was packed. The line into the country store was an hour’s wait. Seemed like the people with prior commitments who couldn’t go, all of a sudden could…. and did.

I had my watercress stew and Moloka’i dried squid. I listened to the KES Chorus and met up with a ton of teachers and students. I felt bad that I was actually having a good time. It felt really weird. On one hand, we could have been affected like Samoa or Indonesia. On the other, we were partying, and all was well.