Hehe…. In the spirit of a Rick Steve’s Travel Guidebook, here’s my take on Chinatown Honolulu. This is an update to a post from two years ago. Will be taking my coworkers on a tour soon, so thought this would be timely. 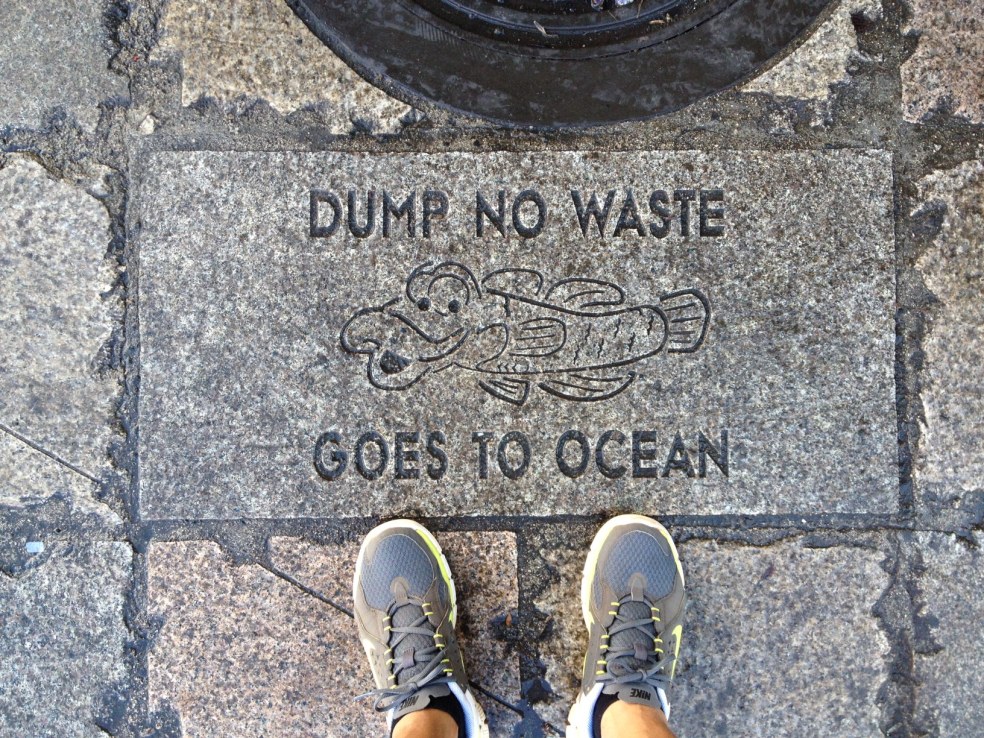 I started exploring Chinatown after moving to Kaka’ako a few years ago. What started out as exercise (urban hiking) transformed into a deeper sense of “place.” It’s become a Saturday morning ritual. I also believe that Chinatown has the best food in Hawai’i. Now I want to share my passion for the sights, sounds, (smells,) and energy of this vibrant community…. 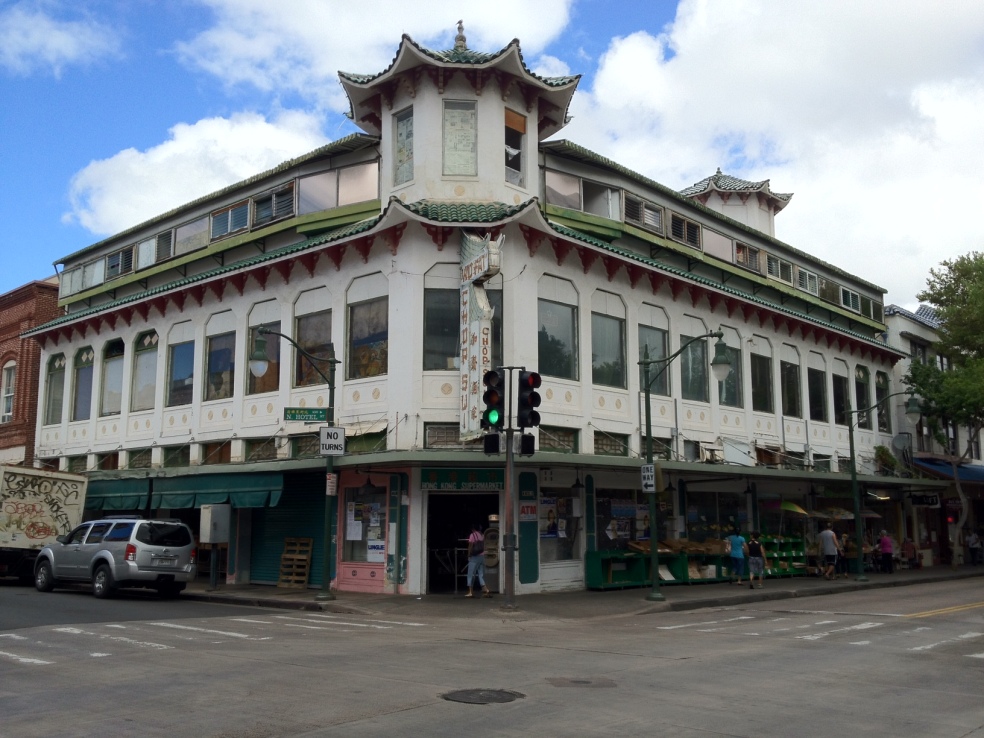 History 101: Chinese laborers arrive in the 1850s when sugar replaces whaling as the prominent industry.
Chinatown fires: In 1900, there was the bubonic plague. 7000 were quarantined. 40 controlled fires were set by the Honolulu Fire Department. One got out of control and lasted 17 days. Only a few buildings escaped the fire and still exist today.
WWII: Chinatown becomes a red-light district.
Statehood/1959: The tourism boom and the opening of Ala Moana Shopping Center lead to the decline of Chinatown.
Revitalization: Chinatown targeted for revitalization in the 70s by Mayor Frank Fasi.

Parking: People have the perception that Chinatown has no parking and that it is dirty. Let me dispel this by saying that there’s a whole lotta parking. In fact, street parking is free on Sundays (however, some of the really good shops are closed on Sundays.) The best parking lot is underground, underneath Smith-Beretania Park (next to the old Empress Theater.) As far as being dirty…. hmm….

Currency: The best restaurants here are cash-only, have sticky menus, and no one speaks English (not even the customers.)


Chinatown is bordered by King Street and Beretania (but includes the Chinese Cultural Plaza,) and by River Street and Bethel. Let’s go….

The Hawai’i Theatre was built in 1922 by Consolidated Amusement. It closed in the 80s, but was renovated and reopened in the 90s.

Bozo: The sign and marquee were created by sign artist “Bozo” Shigemura. He was the only one in Hawai’i at the time who could bend glass for the neon signs. He created the iconic signs for Wo Fat Chop Suey and Club Hubba Hubba. 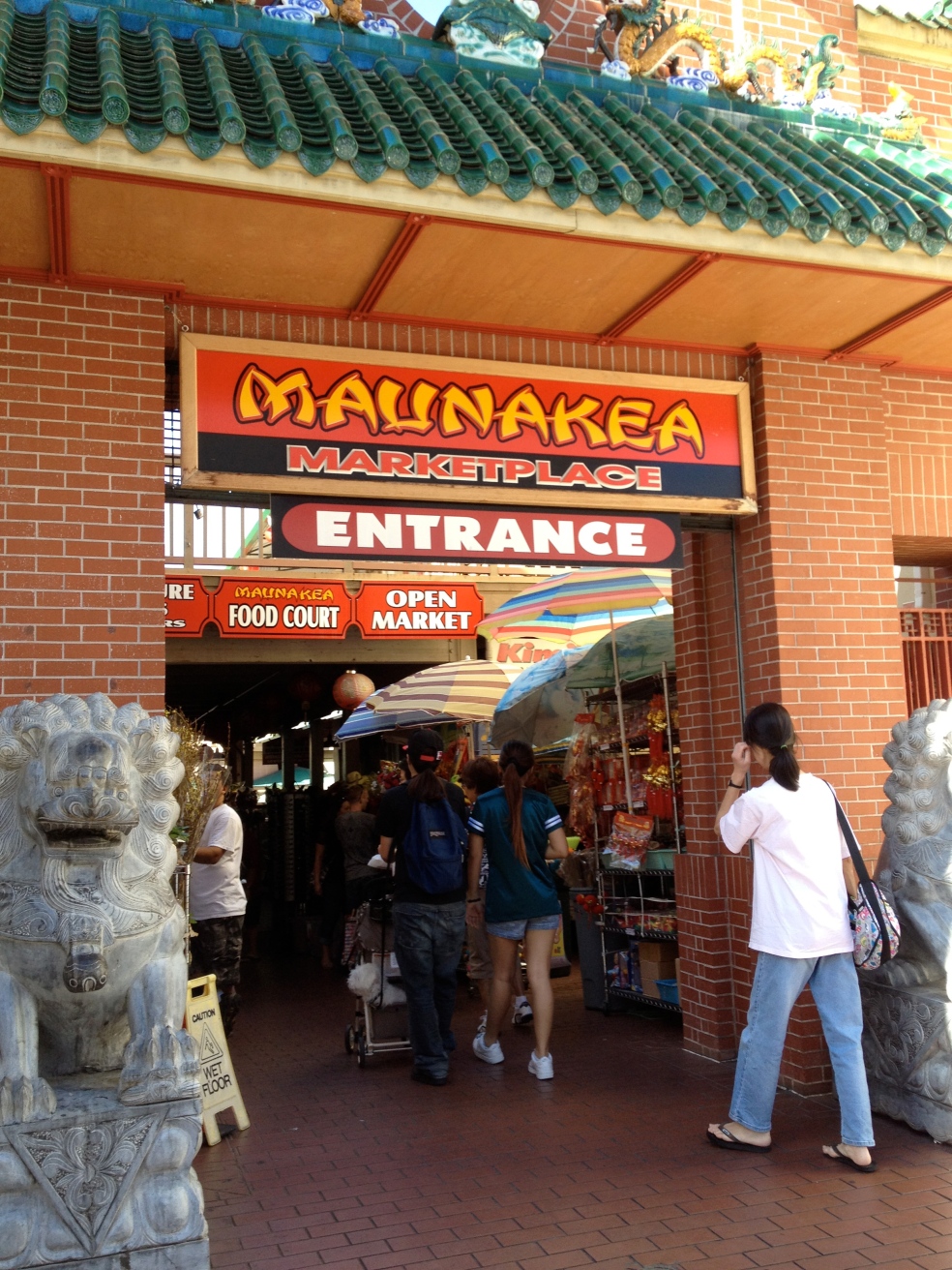 Maunakea Marketplace is a great place to explore. There’s a huge food court, souvenir stands, and a great open market. You can even find old Kung Fu movies on VHS. Mickey Café has the best bubble tea drinks in Chinatown. Instead of powdered sugar, they grind fresh sugar cane. 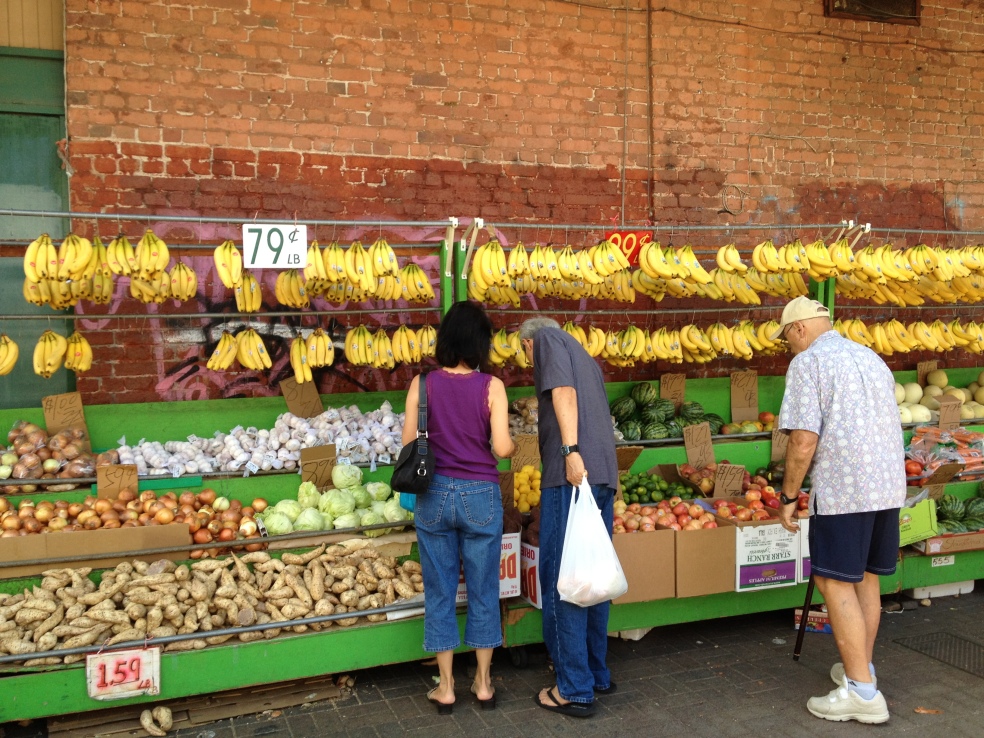 Chinatown is a great place to try a new cuisine, buy produce, and take pictures.

The Chinese Cultural Plaza is where you’ll find all of the dim sum restaurants. I’ve only been to Legend’s, but I hear that Fook Lam and Tai Pan are the best ones. (Locals tend to gravitate toward english names.) You’ll find the older men playing mahjong on the benches along the river. 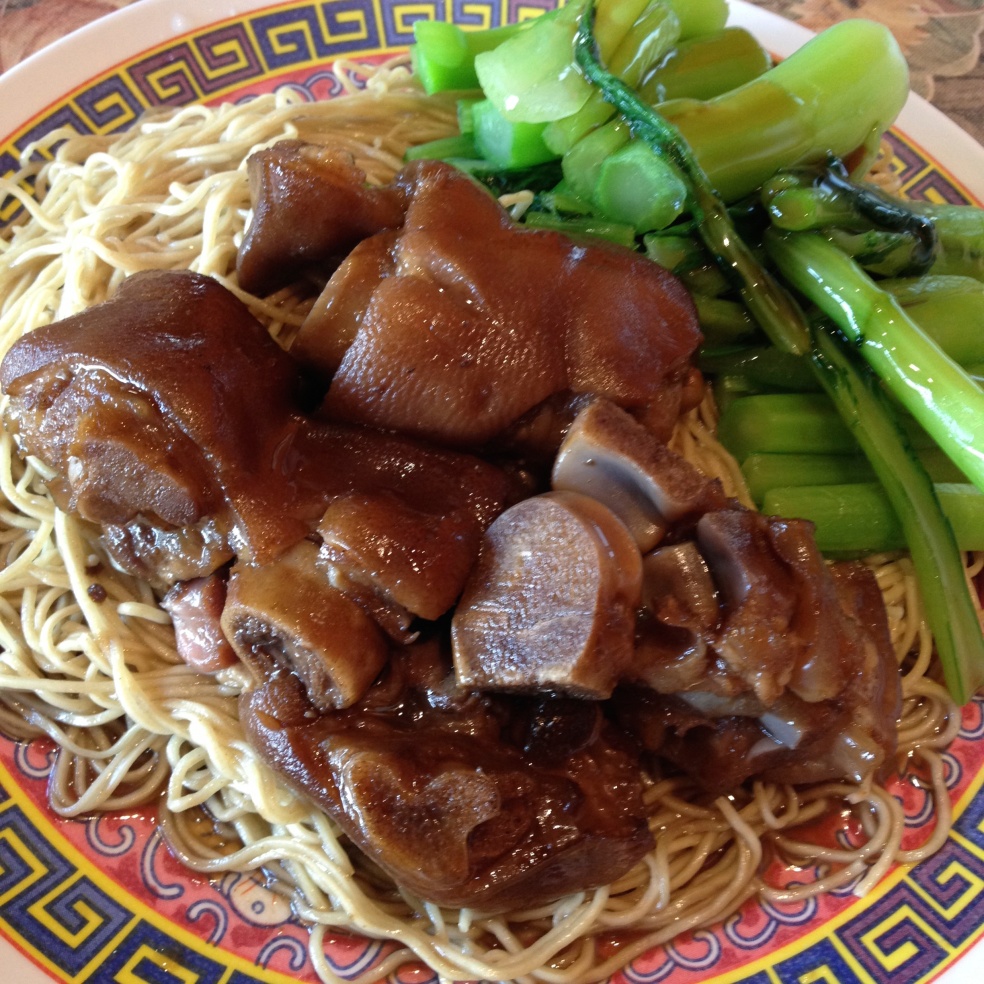 For noodles, my fave place is the Hong Kong Noodle House in the Chinese Cultural Plaza. I usually get the Tossed (stewed) noodle. I ordered this one with pig’s feet. Noms….

Chinatown has the best pizza in Hawai’i. Yes, pizza. Only thing, they’re all in bars. J.J. Dolan’s and Bar 35 are renown for their pies.

Chinatown absolutely has the best phở in Hawai’i. No need to go to “Phở Row” on River Street. My top three shops are Phở My Lan on Maunakea Street, Huang Lan in the Chinese Cultural Plaza, and Saigon Vietnamese Cuisine on King Street. 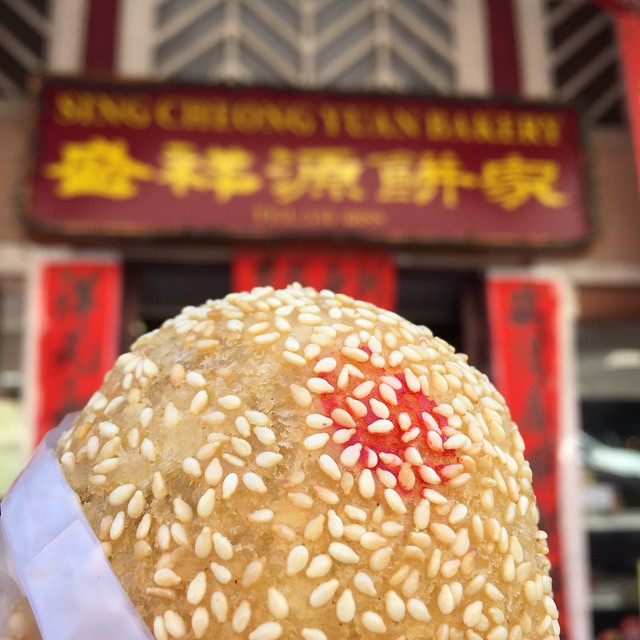 Chinatown has awesome sweets and desserts. The Sing Cheong Yuan Bakery is a landmark. I like the gin dui (black sugar) and mooncakes, but I always go home with a bag of something….

Wing’s Ice Cream has homemade flavors. This one is Raspberry with dark chocolate chip.
Of course, Lee’s Bakery has the most amazing custard pies.

It’s comforting to know that there are still places that I remember from my childhood. Char Hung Sut still has my favorite manapua & pork hash.

I especially appreciate the traditional ethnic foods in Chinatown. This is the Bún bò Huế from Kim An Vietnamese Restaurant. It comes with blood cake and pig’s trotters. This place is the “real deal.”

This is dim sum from Happy Garden (made famous by Andrew Zimmern.) The chicken feet are on the way….

Chinatown also has the coolest, new, “trendy” places. The Pig & the Lady is one of my fave restaurants. Love the Bánh mì sandwiches with the incredible, crunchy bread. Try the watermelon soda.

Lucky Belly is another fave. I enjoy the Bao sandwiches (pork buns) and ramen here. They recently opened Livestock Tavern across the street. 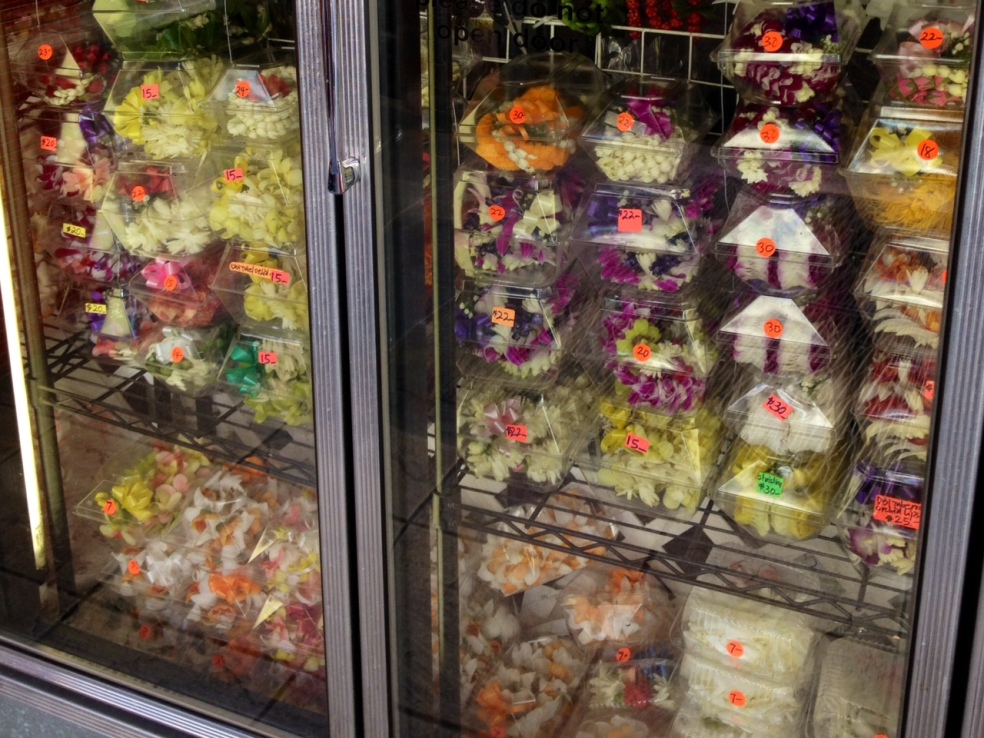 Chinatown also has a great skateboard park, antique shops, boutiques, tattoo parlors, and tons of lei stands. Chinatown is where the creatives & makers set up shop. 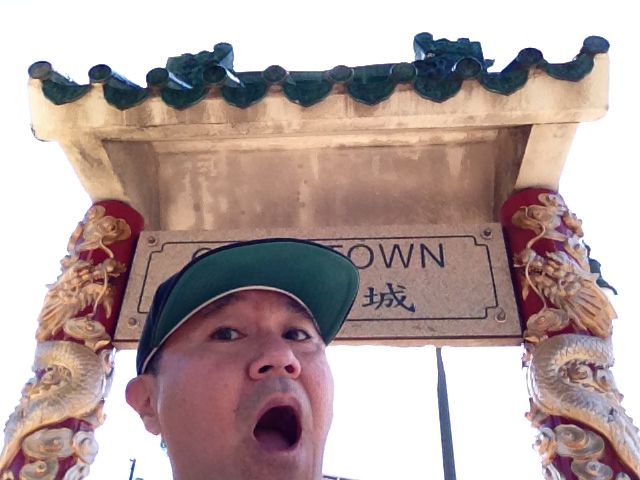 Definitely my kinda place. See you in Chinatown….