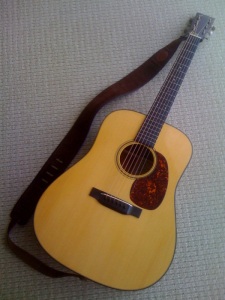 I’m playing guitar again, following a 9-month layoff. The torn ligaments in my finger haven’t fully healed. In fact, it may never fully heal. Still, I’m able to play with only a little pain. I appreciate the guitar even more now. This situation made me reflect on how I got started….

The Dream:
The first time I ever heard someone play the guitar was in the 6th grade. My student teacher, Mr. Curtis Ho, used to play it for the class. Mrs. Nelson could also play the guitar, but she wasn’t as cool as Mr. Ho. He could throw a spiral on the playground at recess. Mr. Ho was my “Guitar Hero.”

The Inspiration:
In high school and college, I listened to groups like Kalapana, C&K, and Country Comfort. I wanted to be like Mackey Feary. (I also noticed that chicks digged guys who could play guitar.)

The Early Years:
I picked up my first guitar in college. It was a secondhand Ibanez steel string guitar. I took an evening guitar class through the Kamehameha Schools Adult Education program. The following year, I took about a month’s worth of lessons from Uncle Harry at the Coconut Grove in Kailua. But the truth is that I actually taught myself how to play. Daryl’s mom at Leilehua gave me a stack of sheet music. I picked up a chord chart and painstakingly looked up each chord….

The Big Break:
My friend Garrett used to play at gigs around town. He would let me come up and play when it wasn’t so crowded. My big debút took place at the Monterey Bay Canners in Ward Centre.

The Curse:
True story. Every establishment that I ever played at soon went out of business. Montery Bay closed down a week after I played there. Garrett let me play at his next gig, Randy’s in Kahala Mall. They shut down a month later. I backed up our school’s chorus at the Pier Bar at the Aloha Tower Marketplace, and they closed down two months later. I then played at the Tropiccino Café in Kapolei. Strangely, they did not go bankrupt. I made a reappearance the following year, and then they shut down soon after. Garrett then invited me to play at the Mai Tai Bar in Ala Moana. I refused. The Mai Tai Bar is now one of the most successful lounges in the islands….

The Band:
A group of teachers at Kapolei Elementary formed a band. It consisted of me and Kel on guitars, ukulele virtuoso Sheri (she played on the Checkers & Pogo Show w/ Roy Sakuma,) and Dee (of Hawai’i Stars fame.) We played at our school’s craft fair and opened for Imua and Pure Heart (Jake Shimabukuro.) Our 2nd and final performance was at a PTA spaghetti dinner….

The Heart of Worship:
I started attending Hope Chapel Kapolei and the Vincents’ minichurch. On my 2nd visit, they asked me to start bringing my guitar. I asked them how they even knew that I played. They said, “The PTA spaghetti dinner.” How could I, the most unholy person lead worship for all of these good people? It didn’t make any sense.

I brought my guitar the following week. It went poorly. It was awkward, embarrassing, and disappointing. I felt that I had let everyone down, and let God down. I gave up. I left my guitar at home the next week. Then something happened….

The next week, Lisa found an old, out-of-tuned classical guitar behind the Vincents’ sofa. She started playing a worship song. She had to pause 2-3 seconds between chord changes. The rest of the group gathered behind her to see the sheet music. They began to sing. It was beautiful. I got to witness true worship. It’s all about the heart….

Yes, my finger’s still sore. I’ll just have to play more with my heart. Thanks Mr. Ho….