Walked over to the “Sunset on the Beach” Hawaii Five-O Season 3 World Premiere today at Waikiki Beach. The weather was spectacular! (Stopped for a bowl of pho along the way. Also checked out the International Marketplace for the first time in years.)

This was my second Five-O premiere. I went last year. The format was similar. This year, there were hula, ukulele, and taiko drum performances. Unfortunately, the dignitaries disrupted the momentum of the evening.

But the crowd erupted with the introductions of the cast members. I was bummed that Grace Park wasn’t there.

Like last year, I left at the very start of the screening (I know, crazy….) It was just too crowded and noisy. Looking forward to watching Episode 1 tomorrow night. Be there, aloha. 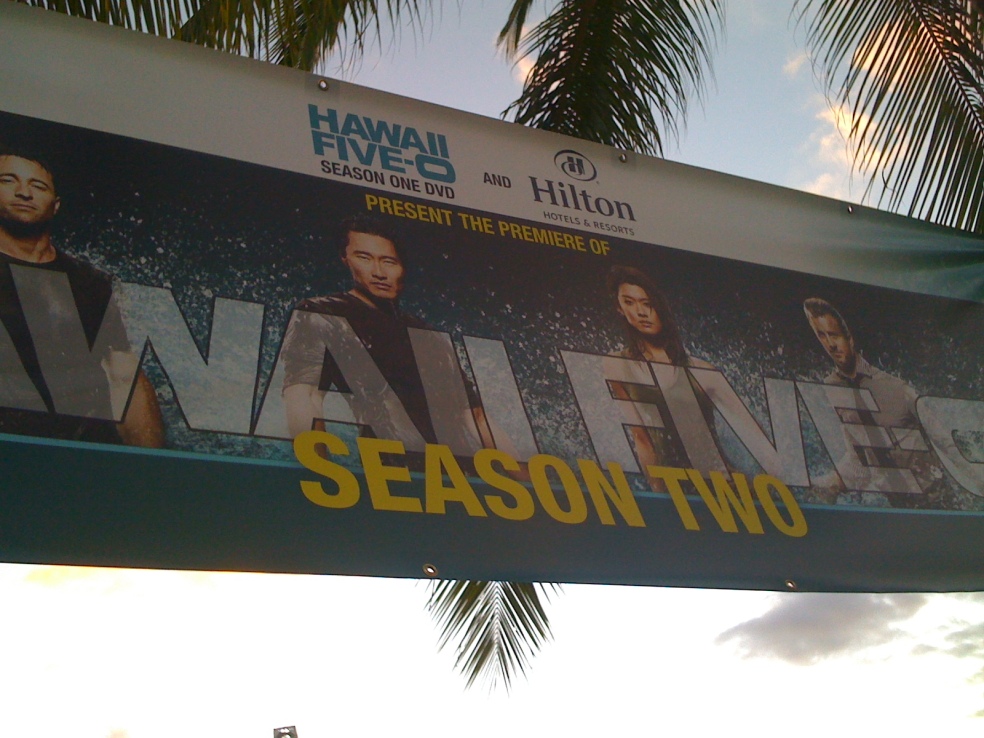 It was a spectacular afternoon at Waikiki Beach. Gorgeous weather, nice breeze, good waves. It made for the perfect backdrop for this event.

There were concerts, food tents, and just too many people. It was way too crowded. They estimated that there were more than 10,000 here. I thought to myself, “Wow, look at all these crazy people….” Then I realized that I was one of them. As the celebrities arrived onto the red carpet, there was an incredible energy in the air. People were screaming and holding up their iPhones & iPads to capture the moment. I was not able to take any photos of them since I was 5 rows deep behind the barricade.

Luckily, the Red Bull girls wanted to be on my blog…. ahem.

The event actually started a little after 7pm. It opened with fire dancers & Tahitian dancers. Then there were speeches by local dignitaries. When the stars were finally introduced, the crowd erupted. It had that rock concert atmosphere.

But my true adventure of the day was actually catching the Bus. The last time I rode the bus was in 1986. I just didn’t want to fight the traffic and fight for parking. I had to call the operator to make sure that I would be catching the right bus on the right street. Riding the Bus in Waikiki at night is truly an experience.

But here’s the crazy part. I stayed for all of the festivities, but left right before the actual premiering of the episode. I was off to the side and had a poor view of the screen. So until Monday, “Be there, Aloha….”

I really like this show! Haven’t had a favorite TV show since “Taxi.” I watch ESPN SportsCenter and No Reservations w/ Anthony Bourdain, but this is my fave. I think it’s well-made, and I like the local references. (I admit that I probably wouldn’t watch it if it were filmed in L.A.) But it’s not, and I haven’t missed an episode so far.

Here are some scenes / cameo appearances that I hope to see in the future:
Jack Johnson playing in a bar in Hale’iwa.
Somebody eating a spam musubi….
Jake Shimabukuro strumming his uke on the beach.
A U.H. sporting event.
A cookout on the sandbar in Kāneʻohe Bay.
Kono training with B.J. Penn.
Me, as an extra….