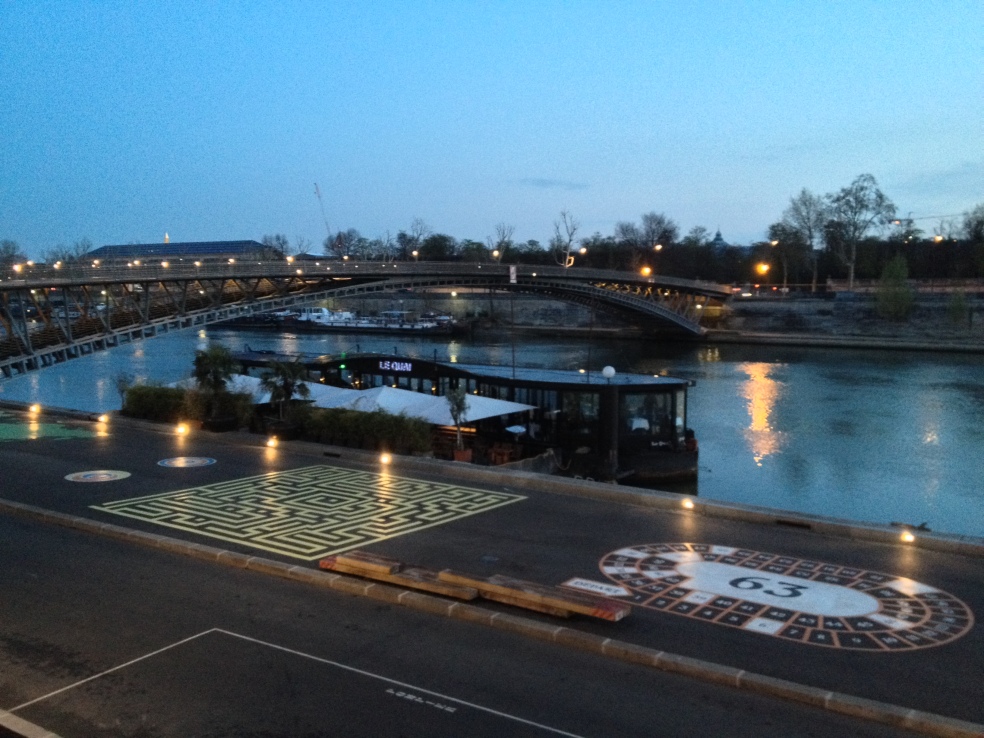 Had my first good night of sleep. Left the hotel at 6am and walked westward along the River Seine. It took an hour (2 miles) to reach the Eiffel Tower. Took pictures along the way.

My heart started pounding when the tower came into view.

I got there super early, so I walked around the adjoining park and took lots of pictures. 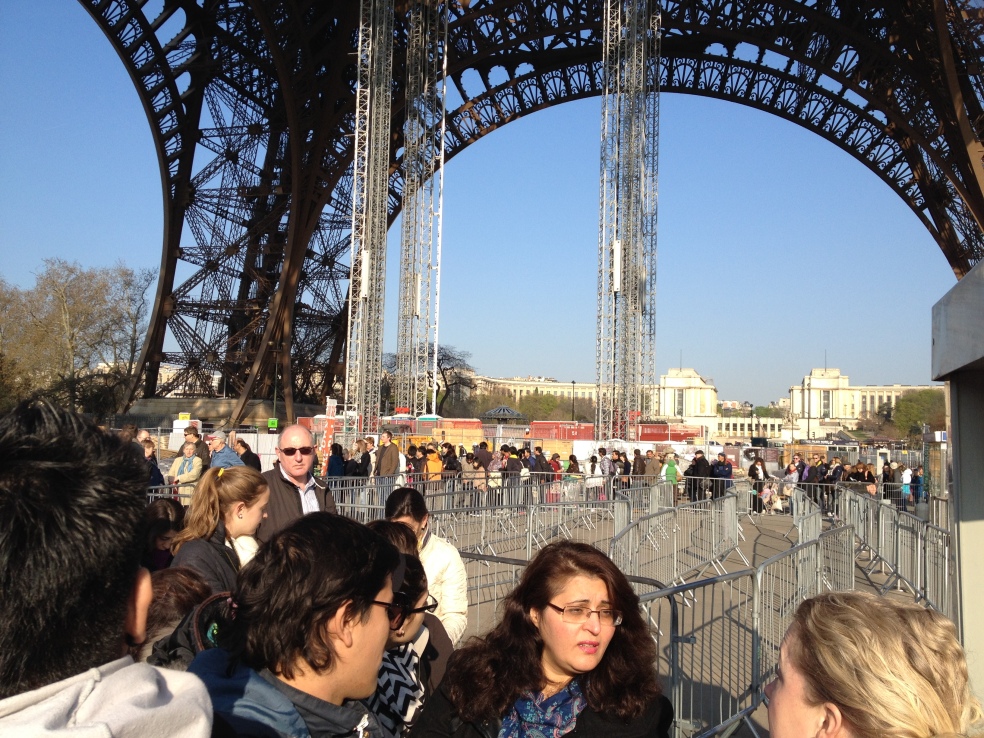 It was my intention to walk up the stairs to the 2nd level of the tower (mainly to avoid long lines.) But because I was first in line, I decided to just buy a ticket and ride the lift to the very top. By 9am, the line must’ve been in the hundreds. Since there were only two lifts in operation, it must’ve taken forever for the people in the back of the line.

I met a really nice family from Atlanta in line. The daughter has a fear of heights, even more than I do. It was a pleasure talking with them. 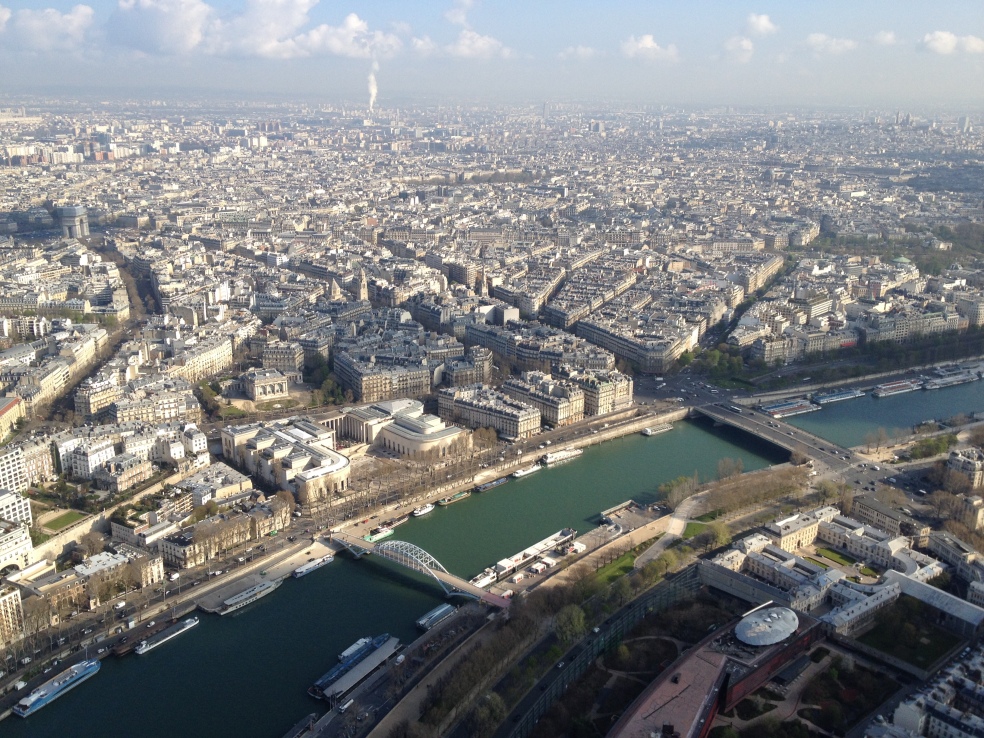 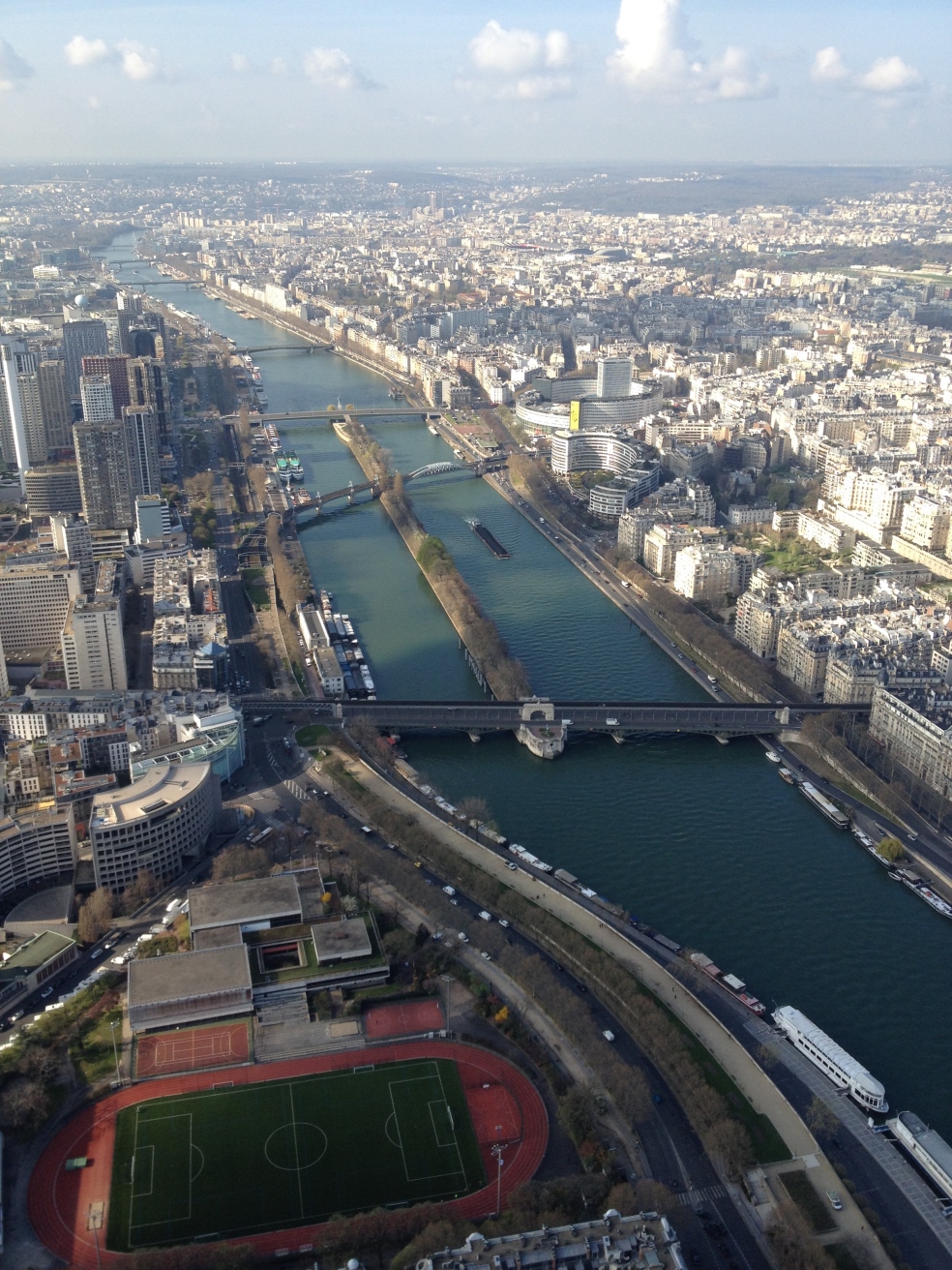 Here are a few of the views from the top. Click to enlarge. Stupéfiant! 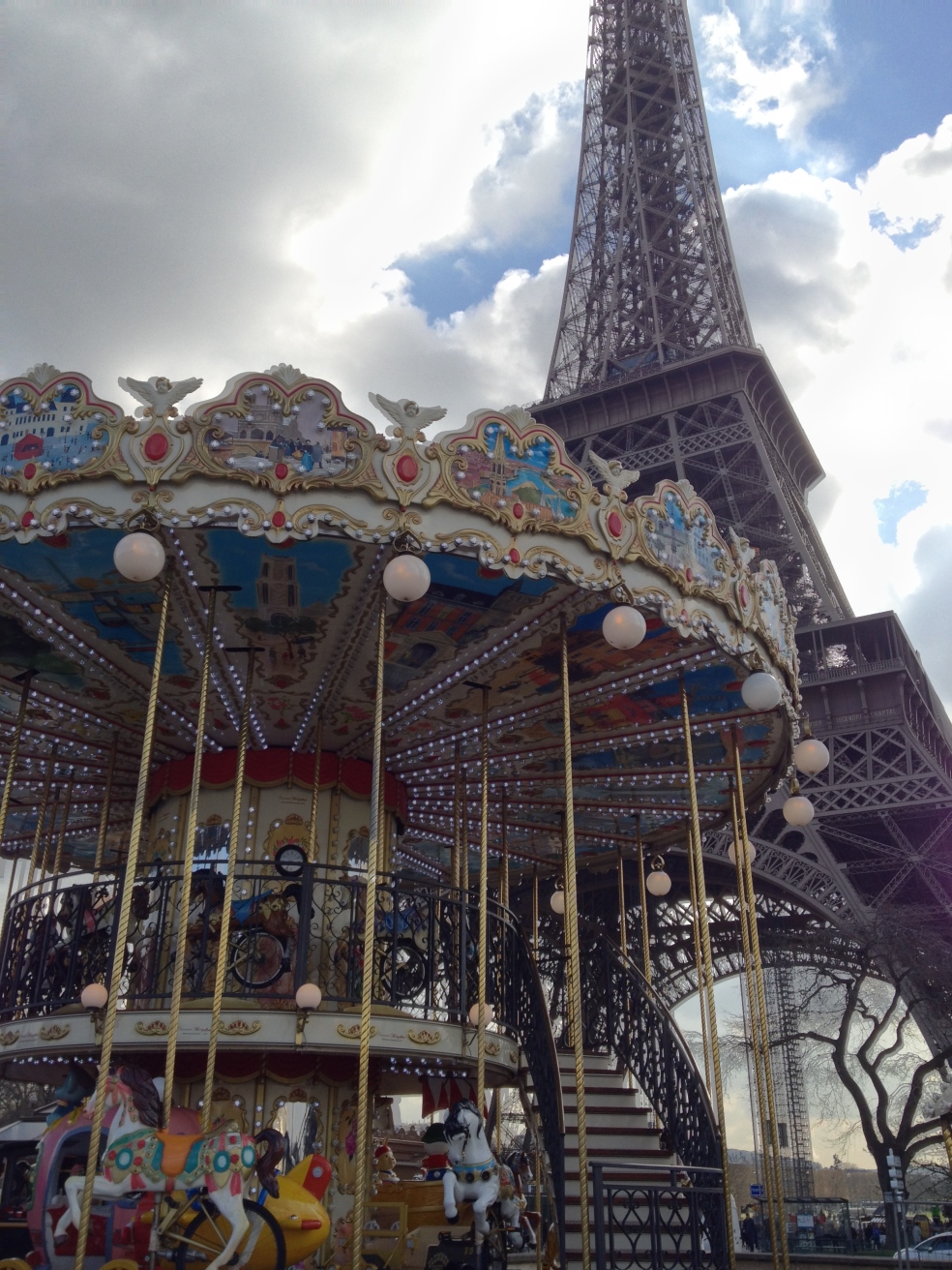 Started my way back to the hotel. I never got lost in Paris, even with my pitiful sense of direction. Everything that I wanted to see was along the Seine. I didn’t take shorter routes, because I really wanted to spend time strolling along the river anyway.

Paris is a great city for joggers as well. Wish I had my longboard skateboard here….

It was cool seeing playgrounds and hopscotches along the way.

This is the Pont Alexandre III. It’s probably the nicest of the bridges. 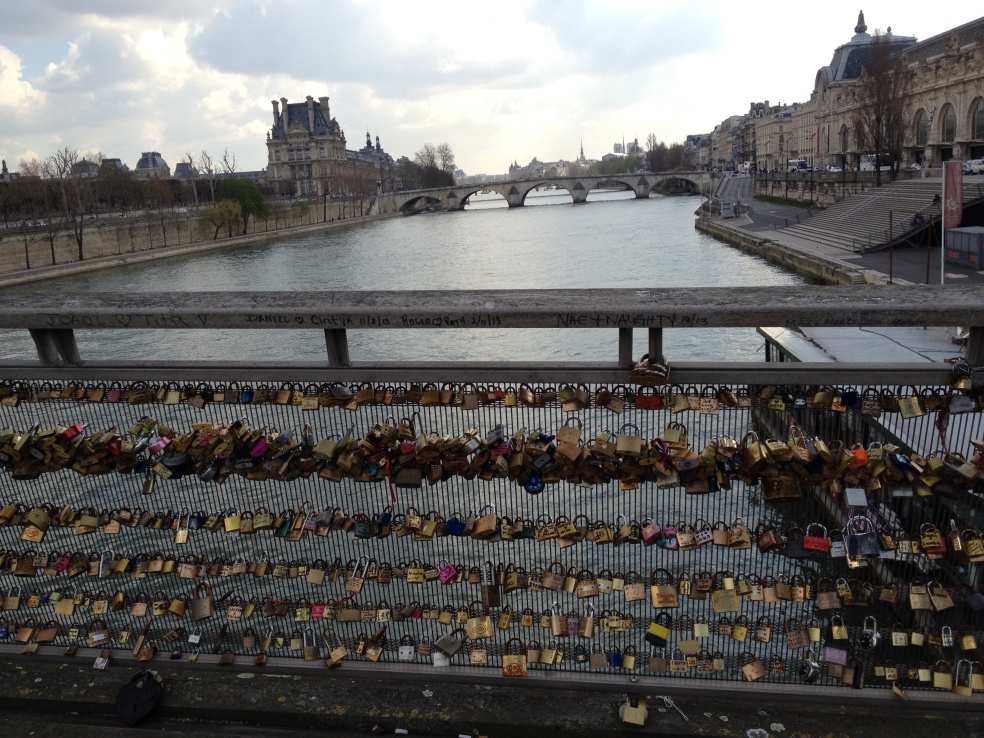 A number of bridges had these locks of love.

My toilet story:
This is a public restroom called a Sanisette WC (“water closet.”) It is free, and it is automatic. I thought I would give it a go. After reading the directions, I pressed to open, went in, and pressed to close. After undoing my button-fly jeans, I realized that I’d better lock the door. Not knowing that it locks automatically, I accidentally opened the door with my jeans “undone.” I looked at the lady standing in line in shock (she was in shock too.) I scrambled to get the door closed. Now this happened on Boulevard Saint-Germaine, where there are hundreds of people walking by. Hundreds…. 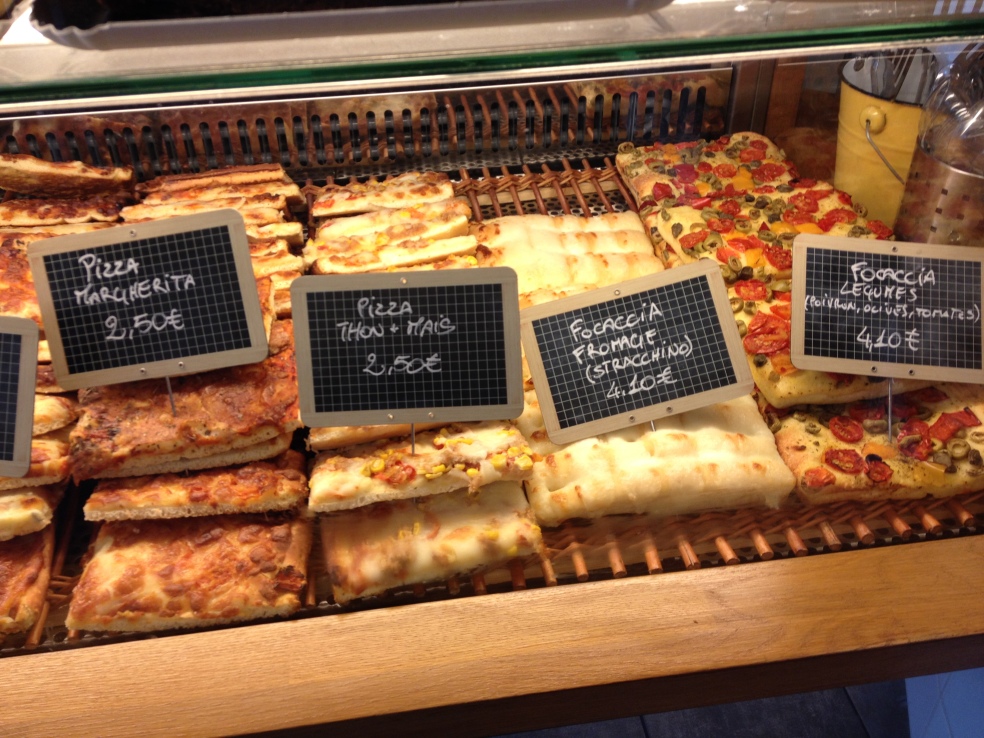 For lunch, I stumbled upon this great take away café called Vera e Andrea.

This baguette sandwich was incredible! It came with ham and stinky cheese. So ono! It also had lettuce, tomatoes, and mayonnaise. I then went back to the hotel for a quick nap. Saw the rock singer Rod Stewart doing some shopping with a tall blonde woman.

In the afternoon, I had a glass of Languedoc – La Clape Château Rouquette at the café Les Deux Magots. So relaxing….

I then went to look for souvenirs. Here is one of the many bouquinistes that are set up along the River Seine.

For dinner, I found another take away café near my hotel called La Boule Miche. I had a pizza which was “ok,” and a pistachio eclair that was insane.

Back at the hotel, I helped a poor tourist carry her 50 lb. suitcase up the crooked stairs to the 4th floor. So glad I travel light.

Ended the evening at Café de Flore. Had a Meteor bière. There was a street musician playing jazz clarinet. 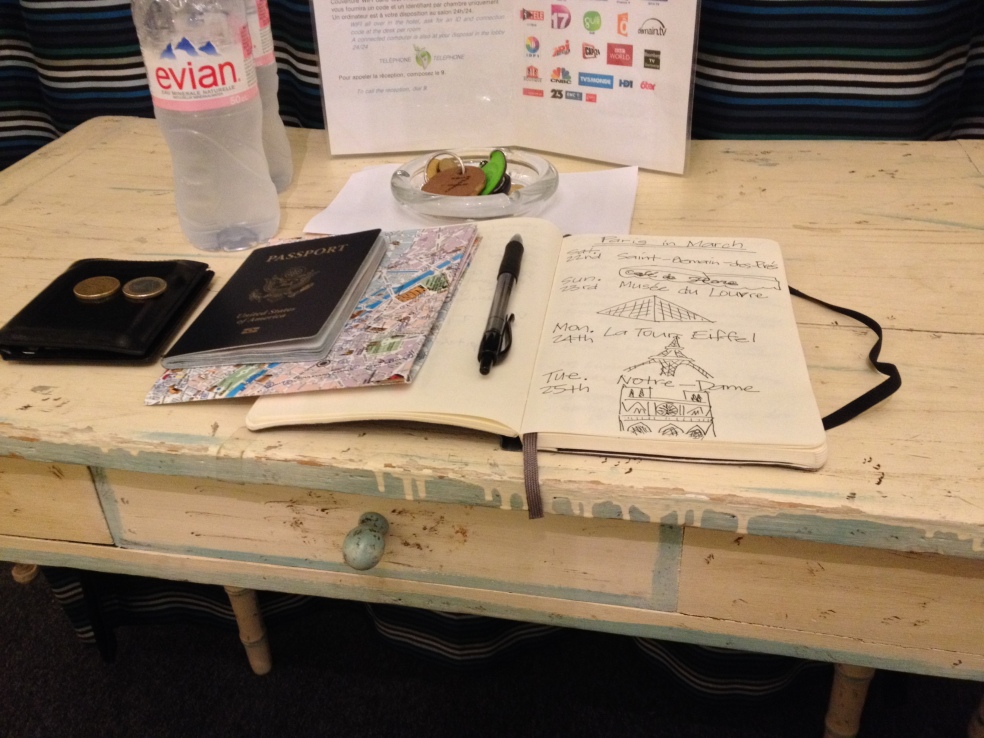 Each night I would journal in my Moleskine notebook. Another great day.